Tyler was a loving and kind young man who was dedicated to his family and friends. His beautiful blue eyes and infectious smile lit up a room. He was a guy who always took care of everyone else and cared so immensely about others feelings. He was a sensitive and affectionate guy who had a heart of gold. He was always respectful to his parents and protective of his brothers. We have many precious memories of Tyler growing up in Pickerington. He enjoyed his 23 years of life doing things like riding his bike to the park, fishing in the park pond, skipping rocks in the creeks and playing youth sports. He loved sports of all kinds, especially football. Tyler was a 2007 graduate of Pickerington High School North where he excelled in academics, football and baseball. He was proud to be a Panther and he was extremely loyal to his team and school. Tyler loved athletics and worked hard to excel at everything he committed himself to doing. 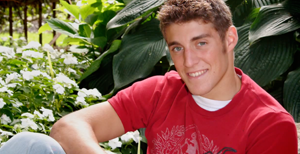 He never gave up! Tyler accomplished his boyhood dream of playing Division I football after earning a scholarship to the University of Akron. He followed up that dream by earning a starting spot his second year and then lead the team in tackles vs. Wisconsin in the season opener. Playing football in the “Horse Shoe” in front of thousands of fans was also a dream come true when his team played Ohio State. He could hardly contain his excitement! Tyler was pursuing a career to help other people.

In honor of his memory, Tyler’s Light was formed to do just that, help others. His life ended much too soon, but Tyler was a gift to all those who knew him and his light will shine on. As Tyler would want, we will not carry on without him, but we will carry on for him. Tyler’s Light is the affect that Tyler has left on all that were touched by his life. If you or someone you know is affected by addiction, Tyler’s Light is here to help. Please use this website as a resource for education and action. Learn about the drugs that are prominent in the community – leverage the resources we have listed and most importantly reach out to Tyler’s Light when you need help.

Through community engagement, awareness, education and support; to become a resource for the people of Pickerington and Fairfield County, Ohio in order to prevent drug addiction. Drugs are in our community in places we least expect them. Drug education and awareness for students, families, & communities

To equip our communities and our nation with information and resources to help people choose a drug-free life, while providing resources for family members and/or friends who are involved in the battle against addiction.

We appreciate the help from our partners which enables us to continue to accomplish our mission. If you are interested in becoming a Tyler’s Light Partner, please contact us.

“We are ever so grateful to you for coming to IN!  Your presentation made an impact on our school.  We’ve gotten a lot of positive feedback and a school board member informed us that about 4 students reached out to a school counselor the same day for help.  Not only did your presentation allow you to share your powerful message, but you also helped kick start our Brady’s Hope org.  For that we will always be grateful!”

Become a Partner or Sponsor